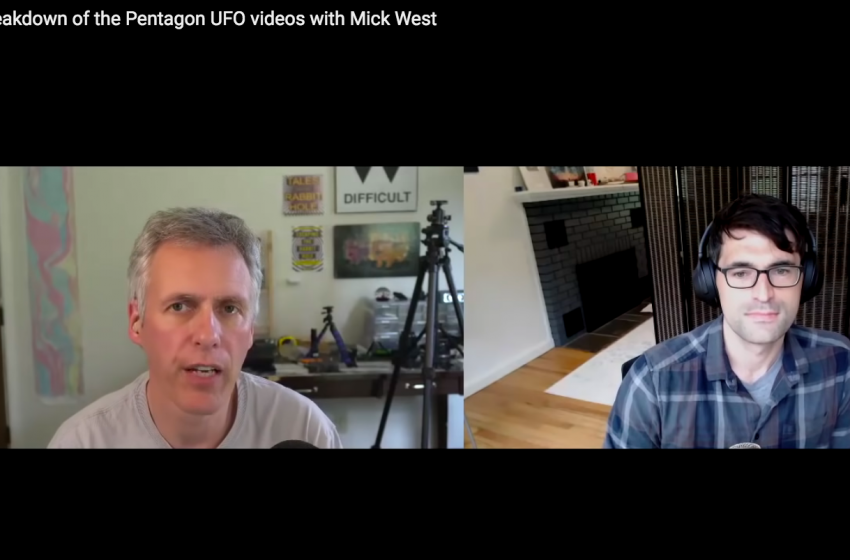 Skeptics and those with opposing views (and even people who are simply oppositional by nature) help to advance rational dialogue.  Sadly, however, the current team of UFO skeptics is weak.

Their skepticism seems to be based on rigid belief and arrogance rather than reason. Mick West, in particular, bends over backward to develop an earthly explanation for a UFO video even if his explanation is far less likely than an alien presence on earth. Recently, West has become something of a troll on social media, seeking to agitate UFO Twitter rather than to serve as a reasoned opposing voice.

Adding to this trend is a National Review piece by reporter Andrew Follett, a former writer for Tucker Carlson, who states that recent UAP sightings are not aliens. Follett points out the self-evident point that because an object is unidentified does not mean it is an alien craft, and says that “the videos disclosed so far all have obvious potential terrestrial explanations.”

Follett adopts the West approach to dismiss the “GoFast,” “FLIR,” and “Gimbal” videos as sea birds, ignoring contextual information, including the military’s own advanced tracking systems and the experience and expertise of its personnel.

Follet speculates that the military may wish “to let the media frenzy continue in order to draw more attention to the technically impressive infrared-imaging technology revealed by the videos, as a subtle warning message to adversarial nations. Also, the U.S. government has a long history of letting the public imagination run wild with extraterrestrial conspiracy theories to divert attention from classified projects or accidents. The DOD only confirmed the videos’ authenticity because of a stunning number of Freedom of Information Act requests regarding the leaked videos; providing any additional clarification might risk revealing military secrets.”

Follett goes on to debunk other sightings and says “some things never change, like the human fascination with UFOs . . . and the weakness of the evidence that the unidentified objects are anything more alien than geese.”

Follett and West may be entirely correct, of course, and the odds of alien craft, or highly advanced technology from global adversaries, is very, very low. But if birds and balloons that have caused the current fervor, we are in big trouble on national security. This would mean that the dozens of Navy and military professionals who cannot explain the sightings, but who are certain they are not geese or balloons, are wildly incompetent. Why would China or Russia even need advanced drones? We can’t tell a drone from the exhaust of a jet.

People are taking a very big leap if they plant a stake in the ground that we are living with aliens. They could be right or they could be wrong, but it is a big claim that requires a lot of proof.

On the other hand, how can West and Follett so easily dismiss David Fravor, Alex Dietrich, Chad Underwood, Kevin Day and the host of highly credible, highly trained witnesses who are clearly not crackpots?  It is a bizarre level of arrogance to state that these people – with all the supporting resources they had – are badly mistaken while they, West and Follet, can see the truth via YouTube.

The irony in all this is that the UFO aficionados are, in large part, more open-minded, less rigid and more humble than the debunkers. The members of UFO Twitter clearly believe that the UAPs are aliens, but they generally include a caveat that no one really knows. No one, of course, except West and Follett.

Effective debunking requires the skeptics to debunk Fravor, Dietrich, Underwood, Day and others. It requires skeptics to interact with the military to disclose why it is effectively supporting a UAP narrative.

It seems that West and Follett believe none of these efforts are required, that they simply know in their hearts that UAPs are really birds and balloons. If this is the case, they are betraying their purported effort to bring rational thinking to the UAP exercise.