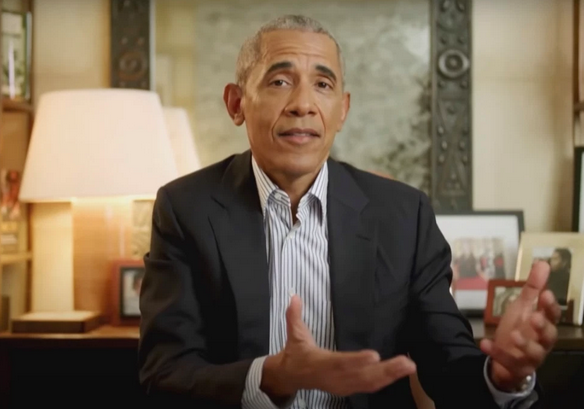 President Obama has weighed in on the current UAP dialogue, as reported in The New York Post, adding to a massive recent wave of mainstream media on the issue.

More importantly, Obama’s comments further advance a trend of public comments that have dramatically reduced stigma around the discussion of UAPs.

Obama has repeatedly made light of rumors that the United States has evidence of alien craft, but admitted, as have a growing number of officials, that the government has no explanations for many of the UAP sightings.

Talking to James Corden, Obama said: “Look, the truth is that when I came into office I asked. I was like, ‘All right, is there the lab somewhere where we’re keeping the alien specimens and spaceships?’ They did a little bit of research …. and the answer was ‘No,’” said, delivering his comments to prompt laughter.

“But what is true — and I’m actually being serious here — is that there’s footage and records of objects in the skies that we don’t know exactly what they are,” he said, referring to the ever-increasing number of UAP videos and reports. “We can’t explain how they moved, their trajectory … they did not have an easily explainable pattern,” he said. “So I think that people still take seriously trying to investigate and figure out what that is.”

This, of course, is the current position of U.S. Senators Marco Rubio, John Warner and others, who are urging the military to take the threat of unknown craft seriously.

The current state of dialogue on this issue is the result of extraordinary work by Christopher Mellon, Luis Elizondo, Jermey Corbell and others, who have relentlessly pushed for the release of UAP videos. Mellon has worked quietly and powerfully behind the scenes with both media and government to highlight the need to address the national security threat.

Almost every mainstream media outlet, notably including 60 Minutes, has recently addressed UAP sightings and the upcoming report from the UAP Task Force.

In the course of six months or a year, we have seen the widespread public adoption of what might be called the “Rubio doctrine,” which states: “I don’t know what they are. I am not saying they are little green men. I am just saying these sighting are real and we don’t know what they are. If we have incursions into military space we need to take them seriously and address the issue.”

This approach allows public figures to avoid speculation into what, in fact, we are seeing while also not seeming crazy to the public. It is a major advancement over previous stigma. However, it does leave open two significant questions. Is it Russian or Chinese technology? The answer: probably not. Is this phenomenon extraterrestrial, (or, non-human if it is actually extra-dimensional)? Answer: it kind of seems likely, but that is one wild conclusion.