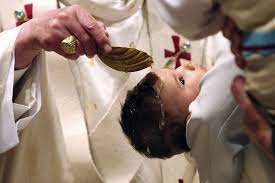 A leader in the Catholic church has stated that he would baptize an alien.

Jesuit Brother Guy Consolmagno, head of the Catholic Chruch’s Vatican Observatory, stated that Catholic teachings would have no problem with the idea of intelligent life on other planets. Further, Consolmagno said, if asked he would baptize an alien.

The comments were reported in a Washington Post piece by Charles Camosy of the Religious News Service.

The article states “that we have something close to strong evidence that we are not alone in the universe” and that “the idea has gone mainstream.”

Camosy says: “I’ve heard lots of folks over the years speculate on what the reality of nonhuman persons on other plants would mean for religious belief — implying that it would be some kind of challenge or problem. But I agree with Ezra Klein, who argued in a recent New York Times column that the challenge is actually more profound for his own secular worldview, which positions humanity as a kind of cosmic accident in an empty cosmos.

On the contrary, Klein notes, religious traditions have always believed that we share both Earth and the larger universe with other intelligent beings: angels, demons, demigods, jinn and other kinds of nonhuman intelligences.”