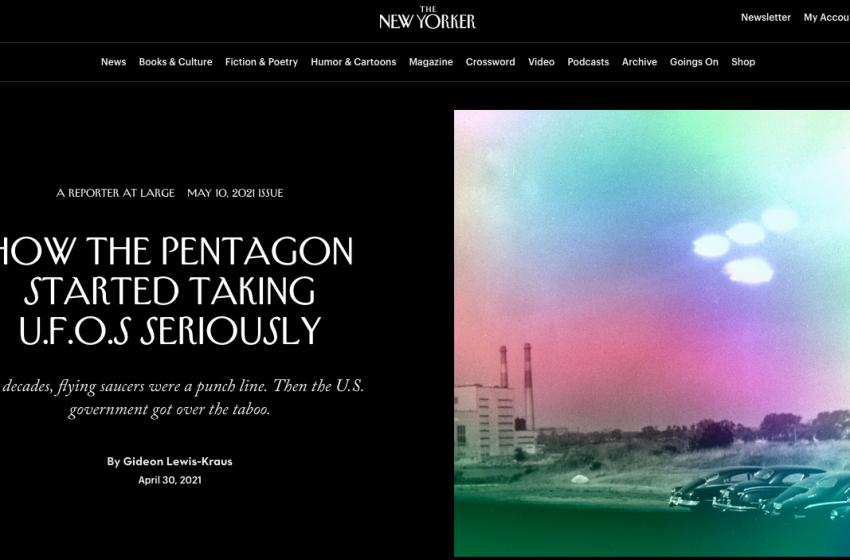 The New Yorker magazine joins other elite media by bringing UFOs and UAPs further into the mainstream with an extensive article on UFOs and the Pentagon’s approach to the issue. How The Pentagon Started Taking U.F.O.s Seriously, (paywall) by Gideon Lewis-Krauss, explores the history of the UFO dialogue, largely relying on the efforts of Leslie Kean to guide the story.

The piece leads off with a recap of Stephen Greer’s 2001 National Press Club news conference in which he produced a significant report on disclosure with numerous non-credible witnesses. The piece then jumps back to ufologist George Adamski, who claimed to have had an encounter with aliens concerned over United States nuclear-bomb testing, and other earlier sightings.

Lewis-Kraus introduces the perspective of Leslie Kean, co-author of the seminal New York Times article and the 2010 Random House book, “UFOs: Generals, Pilots, and Government Officials Go on the Record.” Kean reportedly became engaged with the UFO subject after reading a report by retired French generals and scientists, “U.F.O.s and Defense: For What Must We Prepare Ourselves?” Her efforts to explore the subject ran into the problem of the UFO stigma.

The article then covers a series of historical UFO incidents, including pilot sightings, Project Blue Book, J. Allen Hynek, and the 1966 incident in Michigan, which Hynek, as chief debunker, described as “swamp gas” (the 1966 version of bokeh). Lewis-Kraus includes the extensive “Scientific Study of Unidentified Flying Objects,” or Condon Report, and mentions Tim McMillan, retired police lieutenant and #UFOTwitter leader, who is quoted as saying, “You didn’t even need the other seven hundred cases. You only needed one like that to say, ‘Hey, we should look into this.’” The piece mentions the 1976 incident, covered by Kean, in which a squadron commander in the Iranian Air Force intercepted a glowing diamond outside Tehran. Weapons and radio communications were jammed.

Lewis-Kraus follows Kean’s journey to explore and report incidents, and the challenges she faced. This portion of the piece covers her interaction with John Podesta, President Clinton’s former chief of staff, who has a fascination with U.F.O.s, and with James Fox, director of the documentary “The Phenomenon,” including the National Press Club event featuring 14 highly credible witnesses. This leads to the additional public calls for the creation of agencies to explore the phenomena for national security reasons.

Lewis-Kraus then addresses the current chief skeptics. He quotes Kean as saying “An informed skeptic is a very different thing from a debunker on a mission…. There are many out there who are on a mission to debunk UFOs at all costs. They’re not rational and they’re not informed.” The reporter states that “A tendency to discount or overlook inconvenient facts is a thing debunkers and believers have in common.” Enter Mick West.

Lewis-Kraus writes: “West is a thoughtful, intelligent man. His e-mails feature numbered and lettered lists and light math. Everything he told me was perfectly persuasive, but even an hour on the phone with him left me feeling vaguely demoralized.” The article dives into Robert Bigelow, United States Senator Harry Reid, the USS Nimitz encounters, Lue Elizondo and Christopher Mellon, before coming back to Mick West claims that the U.S. Navy “FLIR1” video reveals a plane. Lewis-Kraus touches on West’s focus on video evidence in exclusion while ignoring all other complementary evidence. “He has no explanation for what the other pilots saw,” Lewis-Kraus writes, “but points out that perceptions are subject to illusion, and memory is malleable.”

Lewis-Kraus: “Were our finest pilots and radar operators so inept that they were unable to recognize an airplane in restricted airspace? Or was the government using the word “unidentified” to conceal some deeply classified program that a branch of the service was testing without bothering to notify the Nimitz pilots? The former Pentagon official assured me that West “doesn’t have the whole story. There’s data he will never see—there’s much more that I would include in a classified environment.” He went on, “If Mick West feeds the stigma that allows a potential adversary to fly all over your back yard, then, cool—just because it looks weird, I guess we’ll ignore it.”

Lewis Kraus ends his piece with a story that essentially sums up the current state of the UFO public dialogue.

Lewis-Kraus: “The government may or may not care about the resolution of the U.F.O. enigma. But, in throwing up its hands and granting that there are things it simply cannot figure out, it has relaxed its grip on the taboo. For many, this has been a comfort. In March, I spoke with a lieutenant colonel in the Air Force who said that about a decade ago, during combat, he had an extended encounter with a U.F.O., one that registered on two of his plane’s sensors. For all the usual reasons, he had never officially reported the sighting, but every once in a while he’d bring a close friend into his confidence over a beer. He did not want to be named. “Why am I telling you this story?” he asked. “I guess I just want this data out there—hopefully this helps somebody else somehow.”

The object he’d encountered was about forty feet long, disobeyed the principles of aerodynamics as he understood them, and looked exactly like a giant Tic Tac. “When Commander Fravor’s story came out in the New York Times, all my buddies had a jaw-drop moment. Even my old boss called me up and said, ‘I read about the Nimitz, and I wanted to say I’m so sorry I called you an idiot.’”