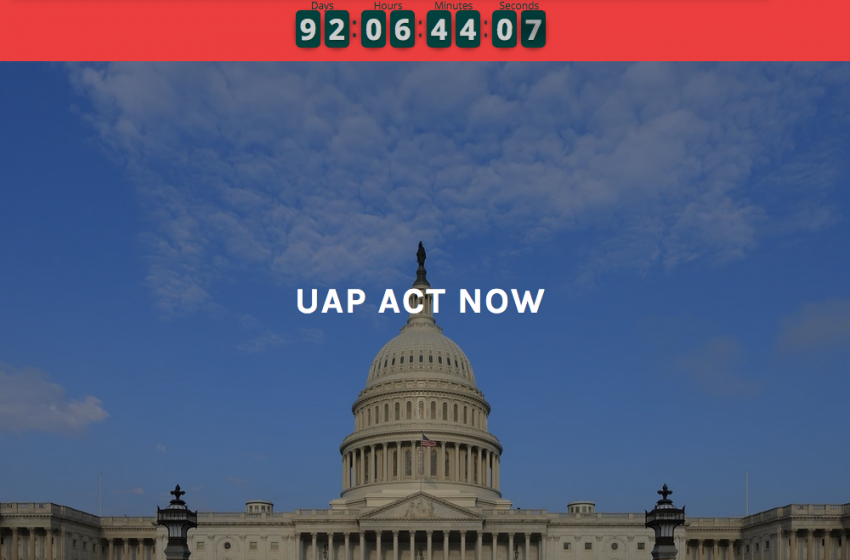 James C. Fox, director of The Phenomenon, has launched a new site, https://uapactnow.com, to marshal community pressure on legislators in the run-up to the release of an intelligence agencies report summarizing what the government knows about unidentified aerial phenomena. The site, which features a countdown clock to the expected report release date, seeks to help ensure proper disclosure of information on UAP.

“For the first time in history, American citizens have the opportunity to engage our government and influence the extent of the unclassified information included in this historic public report,” Fox states. “The countdown to June 25, 2021 is underway!”

The site, which quotes Luis Elizondo and Christopher Mellon, list the numerous government officials who have acknowledged that “organizations within the government possess evidence confirming the existence of objects of unknown origin displaying advanced operational capabilities that defy physical laws as humans understand them.”

UAPActNow includes links to contact information for legislators and a sample letter.

EMAIL SUBJECT: I request transparency with respect to UAPs

We are in the midst of an unprecedented 180-day countdown for intelligence agencies to provide a report to Congress summarizing what our government knows about UFOs, now referred to as UAPs (Unidentified Aerial Phenomenon).

I respectfully request that 1) the unclassified assessment specifically address the longstanding assertion that the government is aware of craft of unknown origin displaying advanced operational capabilities that defy physical laws as humans understand them and 2) Congress and the Department of National Intelligence faithfully and honestly release these data and any additional evidence as part of the congressional report. This release request includes all historical data whose 25-year classification requirement has expired that has been collected over many decades by different intelligence agencies.

This matter concerns us all, and I hope you will fight to ensure proper disclosure in the name of freedom, knowledge, and progress. As my official, know that you have my full support in this effort.