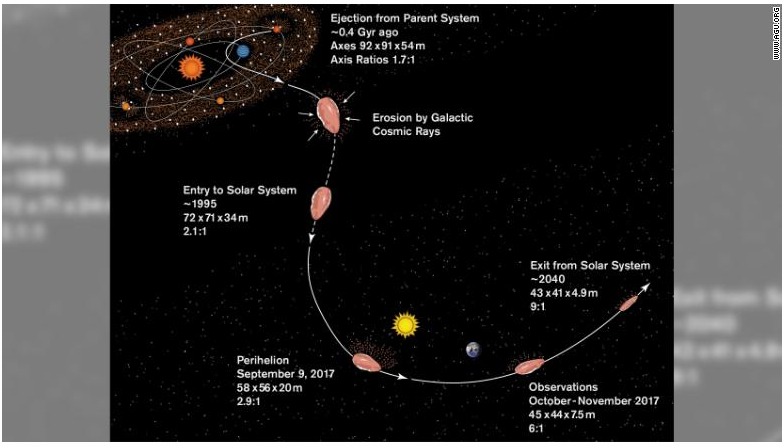 Just as Avi Loeb launches his new book on Oumuamua, Steven Desch and Alan Jackson, astrophysicists at Arizona State University’s School of Earth and Space Exploration, have published research suggesting that the object is likely a piece of nitrogen ice broken off a distant planet.

Desch and Jackson’s published their findings in two studies in the American Geophysical Union Journal of Geophysical Research: Planets.

Oumuamua, Hawaiian for “scout,” or “a messenger that reaches out from the distant past,” confounded scientists when it accelerated against the gravity of the sun as it passed through our solar system.

This acceleration would be explained if the object was a comet, but the elongated cigar-shaped Oumuamua had no tail. It was also flat like a pancake, unlike comets, which are spherical. The object also accelerated past the sun more quickly than comets do when their ices vaporize from the sun’s heat.

Enter Avi Loeb, who created worldwide news by suggesting Oumuamua, the first interstellar object we have identified, was a piece of alien technology.

“In many ways Oumuamua resembled a comet, but it was peculiar enough in several ways that mystery surrounded its nature, and speculation ran rampant about what it was,” said Desch, according a CNN story on the subject.

Desch and Jackson did not embrace the alien technology explanation and found that solid nitrogen best matched the motion of Oumuamua and that the reflectivity of the object also matched bodies made of nitrogen ice. They suggested that it may be a solid chunk of ice was dislodged from an ice-covered planet, like Pluto, after an impact.

Let the battle between Loeb and other scientists begin.