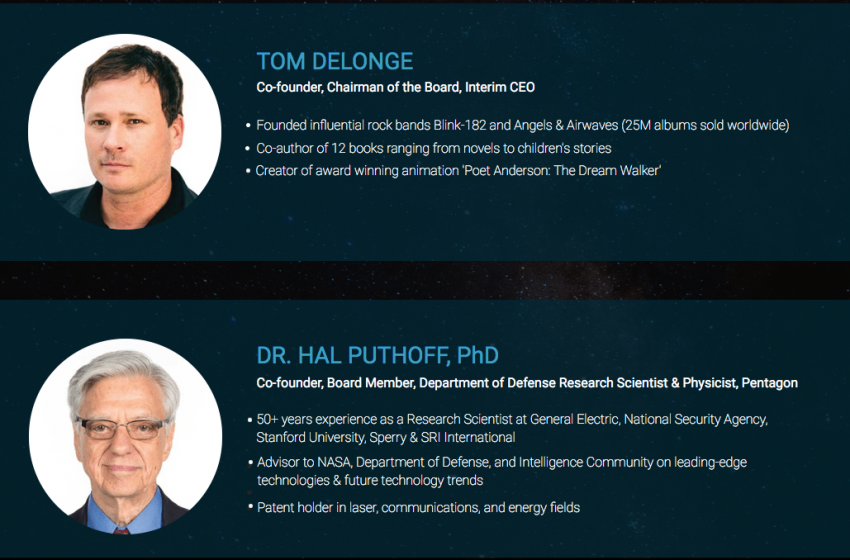 To The Stars Academy has formally articulated a fundamental shift in its mandate, detailing plans to move away from UAP-related science and technology toward entertainment. The news was contained in a February 17, 2021 SEC Form 1-U filing circulated by Twitter user @Ryan_Ha. A Form 1-U is a uniform statement of purpose that a company files to report fundamental changes to its business.

Citing the widespread impact of the COVID-19 crisis, TTSA said it would focus on recent areas of success, the most likely avenue toward producing shareholder value. TTSA said: “To achieve its goals, TTSA has decided to restructure its operations to scale back its initiatives in science and tech commercialization and to place a greater emphasis on the operations of its entertainment business.”

Founded by Tom Delonge and Dr. Hal Puthoff, TTSA has experienced commercial success with its recent Unidentified: Inside America’s UFO Investigation series, which was picked up for a second season on History. Along these lines, TTSA said that it would seek to develop existing TTSA intellectual assets into “films, TV, books, and merchandise.”

The organization also said that it will seek “strategic partnerships for the production and financing of its films,” and that it would “explore merger possibilities in areas that could make it a vertically integrated film studio.” TTSA outlined other possible avenues for its expansion as an entertainment company, including “film product licensing and acquisition of literary talent for the creation of its film scripts.”

The company’s shift in focus led to the departure in December 2020 of Stephen Justice, TTSA’s Chief Operations Officer; Luis Elizondo, TTSA’s Director of Government Programs & Services, and Christopher Mellon, a member of TTSA’s advisory board. TTSA intends to maintain its science advisory board to advance its entertainment initiatives.

In the Form 1-U, TTSA highlighted successful efforts to advance its original mission, namely “the official release and acknowledgment of UAP footage by government officials that has been viewed by over 28 million people, resulting in the mainstream press taking the topic seriously….” It also highlighted “thought leadership briefings at the highest level of the US Government,” “a Cooperative R&D Agreement with the US Army,” and the “formation of a UAP Task Force by the US Department of Defense.”

Ironically, the success of TTSA’s entertainment initiatives may well have been linked to its successful efforts to prompt the release of UAP footage and to activate the federal government on UAP issues — and to the uptick in media coverage cused by these efforts.

TTSA also listed efforts to reconcile internal finances in the Form 1-U. “As part of its restructuring, TTSA has taken steps to reduce debt by selling ‘Love LLC Movie’ assets to Thomas DeLonge, its Chief Executive Officer, for $525,000 in a combination of cash and debt forgiveness, including a reduction in $400,000 in royalties owed as part of the Angels & Airwaves licensing agreement. That licensing agreement has now been terminated and the company is in discussions about renegotiating it. The company is also temporarily licensing to Thomas DeLonge the To The Stars Inc. business, for a monthly service fee, to reduce its overhead liabilities and capital needs through March 31, 2021.”