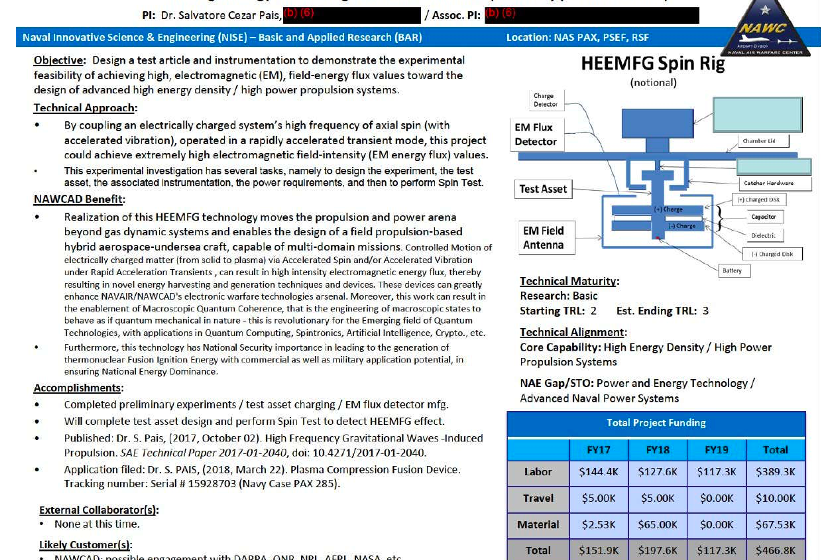 The War Zone, a defense-oriented blog by Brett Tingley on The Drive website, secured the release of extensive documentation about Navy experiments on the concepts and technologies contained in Dr. Salvatore Cezar Pais’ so-called “UFO patents.” The War Zone prompted the document release through Freedom of Information Act requests.

The Navy’s research and experiments were designed to determine the viability of technology related to the “Pais Effect,” a theoretical concept that Pais claims will occur through the “controlled motion of electrically charged matter (from solid to plasma) via accelerated spin and/or accelerated vibration under rapid (yet smooth) acceleration-deceleration-acceleration transients.”

As explained by The War Zone, Pais suggests that this process will lead to “extraordinarily powerful electromagnetic energy fields that can ‘engineer the fabric of our reality at the most fundamental level’ leading to incredible revolutions in power and propulsion, quantum communications, energy production, and even weaponry.” According to The War Zone, the materials include a “For Official Use Only” slide deck that touches on how Pais’ Plasma Compression Fusion Device patent could be used to create a “Spacetime Modification Weapon,” a new form of weapon that would eclipse in power our current nuclear weapons.

From the Navy material:

“Under uniquely defined conditions, the Plasma Compression Fusion Device can lead to development of a Spacetime Modification Weapon (SMW- a weapon that can make the Hydrogen bomb seem more like a firecracker, in comparison). Extremely high energy levels can be achieved with this invention, under pulsed ultrahigh current (I) / ultrahigh magnetic flux density (B) conditions (Z-pinch with a Fusion twist).”

The Navy spent more than $450,000 on research and physical experiments on the concepts, and cited concerns over Chinese progress on the technologies as reasons for filing the patents. NAWCAD reportedly believes the technology has “National Security importance in leading to the generation of Thermonuclear Fusion Ignition Energy with commercial as well as military application potential, in ensuring National Energy Dominance.”

The documents, which include test data, technical drawings and images, come from the Naval Innovative Science and Engineering – Basic & Applied Research Program under a specific project titled “The High Energy Electromagnetic Field Generator.” The War Zone has extensive reporting and material on this subject that can be accessed here, here, here, here and here.