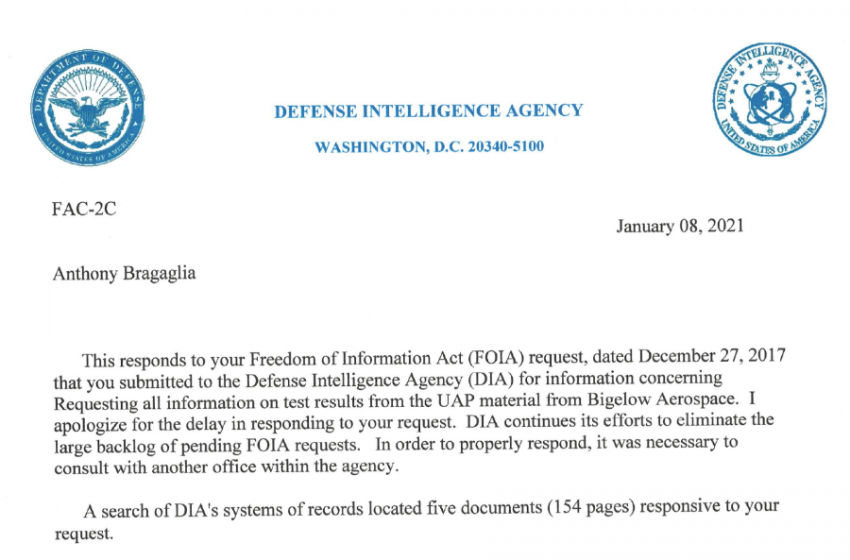 The United States Defense Intelligence Agency has released documents confirming that it has recovered material from UFOs, or anomalous aerial vehicles, including metallic material with reported shape memory and material with the ability to produce a kind of invisibility, compressing electromagnetic energy and slowing the speed of light.

The news was announced on www.UFOExplorations.com by Anthony Bragalia, an independent UFO researcher and reporter, who secured the release of five heavily redacted documents totaling 154 pages following a persistent multi-year campaign of Freedom of Information Act requests.

The materials, which exhibit technological achievement far beyond current capabilities of humans, were reportedly placed with defense contractor Bigelow Aerospace for analysis and storage. According to UFO Explorations, the current location of the material is not known, as Bigelow recently ceased operations and declined to comment.

Bragalia originally submitted the FOIA requests in 2017, seeking UFO/UAP material and “physical debris recovered by personnel of the Department of Defense as residue, flotsam, shot-off material or crashed UAPs or unidentified flying objects.”

After extensive delays and numerous excuses for its failure to respond (and following threatened legal action), DIA provided documents on recovered UFO debris and analysis; on the Advanced Aerospace Threat Identification Program under which the material was administered; on the defense contractor, Bigelow Aerospace, and on possible applications for the material.

Bragalia, who has written extensively on materials recovered in Roswell in 1947, notes that the released DIA material includes information on “advanced technology reports” regarding Nitinol, a “shape recovery alloy” that is similar in many ways to what Bragalia calls “memory metal” as reportedly found as debris in Roswell. The released documents address the possibility for the use of the recovered materials in “advanced aerospace platforms.”

Properties of the so-called metamaterial: it can “slow down light” and even “bring light to a complete standstill;” it manipulates refraction, reflectivity and light absorption, possibly achieving an effective invisibility; it “compress electromagnetic energy;” it has “tunable resonance” which refers to a vibration of large amplitude from a small stimulus, possibly indicating the ability to pull energy from the environment.

Other information in the reports address Amorphous Metals, or “liquid metal” or “metallic glass”, that is reportedly stronger and lighter than any current metal alloy.

According to Bragalia, the report on Nitinol memory metal has not previously been released or published. The reports, “Metamaterials for Aerospace Applications” and “Metallic Glasses,” were posted in June 2020 and available on www.Mysterywire.com.

Anthony Bragalia has a deep history in UFO investigation, and identified the scientists who analyzed the “memory metal” debris from the Roswell crash. He is independent and funds his own investigative work.

A second set of documents is available here.