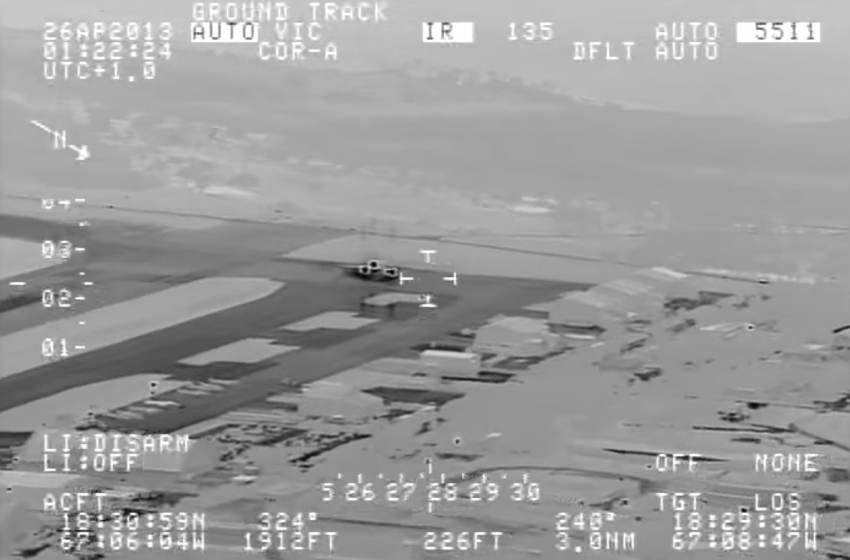 After a nearly two-year investigation, the Scientific Coalition of UPA Studies produced a 161-page report on a 2013 UAP incident at an airport in Aguadilla, Puerto Rico. The incident, which occurred at approximately 9:20 pm on April 25, 2013, involved a DHS Customs and Border Protection DHC-8 Turboprop that had taken off from Rafael Hernandez International Airport on the Atlantic coast in northwestern Puerto Rico. The four-person crew soon sighted a red light in the air above the ocean moving toward the city and were concerned that the control tower had not alerted them to relevant air traffic.

The Rafael Hernandez control tower confirmed that it had a visual sighting of an unidentified light, which disappeared as the object got closer to land. The pilot then began monitoring the object with a thermal image camera system on the plane (reportedly a L3Harris WESCAM MX-15 EO/IR system), tracking it with infrared as it traveled across the airport twice, delaying traffic as it crossed over the runway. The object then flew back out to the ocean, repeatedly submerging and emerging from the ocean, growing in size and, at one point, either splitting into two distinct objects, or reappearing alongside another object.

SCU obtained an original copy of the three-plus-minute, audio-free tracking video from an acquaintance of a primary witness, while also interacting with other witnesses. SCU placed the video online, noting that “There exists no aircraft, projectiles, or other technology known to the authors of this report to have these characteristics or capabilities.”

According to SCU, the object appeared to rotate in the air and to change its dimensions, and it entered the ocean without appreciably slowing down. The detailed analysis shows a craft capable of “traveling at night without lights, at times below tree-top altitude, at speeds approaching 100 mph, and apparently without risk of impacting objects as it passes by.”

Through close analysis of the video, SCU calculated that the object was between three to five feet in length moving at a speed between 40 mph and 120 mph, which varied very little whether in the air or in the water. The object’s speed under water reached a high of 95 mph. Notably, the object showed limited interaction with the water as it impacted the ocean. According to the report, the object’s speed prior to impact was 109.7 mph and its entrance into the ocean only slightly displaced the water and only very slightly slowed its speed.

The object’s thermal image grew in size before it split into two parts, and both parts moved through the air and water at the same speed as the original object. The report states that the unknown object emitted more heat than the ambient air and continued to emit heat in the ocean. However the heat it generated was less than that from a jet engine or an automobile and there was no exhaust plume.

The report states “The object’s speed, maintenance of momentum, directional changes, and its ability to sustain high velocities in water eliminates all aircraft, blimps, balloons, wind-blown objects, any species of bird, mammal, or other natural/man-made phenomena.”

While in the air over the airport, the object can be seen to disappear behind a tree momentarily, meaning that its altitude was 40 feet or lower. The report states that the ability to fly at low altitude at night between trees requires “precise control of movement and a highly responsive propulsion system particularly given the lack of control by aerodynamic devices” such as wings. A notable characteristic of the object is its apparent tumbling as it moves through the air, which ends prior to the object’s entry into the water and as it moves through the water.

“The object witnessed by CBP and tower personnel and recorded on the CBP DHC-8 aircraft’s thermal imaging system is of unknown origin. There is no explanation for an object capable of traveling under water at over 90 mph with minimal impact as it enters the water, through the air at 120 mph at low altitude through a residential area without navigational lights, and finally to be capable of splitting into two separate objects. … “The authors are open to any reasonable explanation that addresses the various characteristics displayed by this object.”

Report authors include the following six individuals: Robert Powell, a 28-year veteran in engineering management in the semiconductor industry. Powell is Director of Research at MUFON (Mutual UFONetwork); Morgan Beall, an environmental consultant focusing on OSHA/EPA regulations. Beall has been a MUFON field investigator since 2009; Larry Cates, a 40-years veteran in programming, systems analysis, application and hardware development. Cates has investigated and researched the UFO phenomenon for over eight years; Carl Paulson, a physicist who served for four years in the United States Air Force designing power systems for the Tokamak fusion reactor at the Princeton Plasma Physics Laboratory. Paulson is a MUFON STAR Team investigator and is a member of the MUFON Science Review Board; Richard Hoffman, an information technology consultant and defense contractor currently serving as a senior engineer with the U.S. Army Materiel Command HQ at Redstone Arsenal in Huntsville, Alabama. Hoffman has more than 50 years of experience in UFO phenomena, and Daina Chaviano, a literary and cultural consultant who has published several books and has won several international literary awards. Chaviano’s works have been translated into 30 languages.