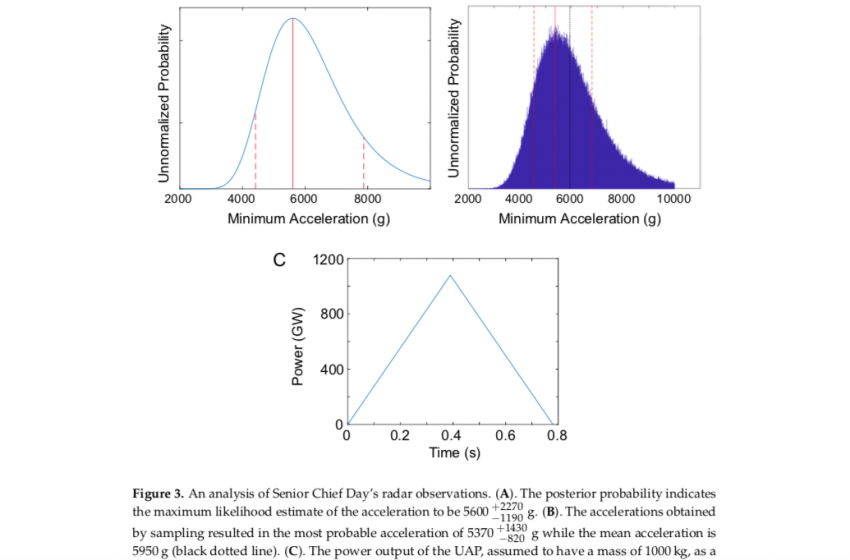 Physicists from the State University of New York at Albany, in cooperation with the Scientific Coalition for UAP Studies, have created an analysis of flight patterns from several UAP sightings, including the November 14, 2004, USS Nimitz/USS Princeton sighting by a Navy F/A-18F aircraft. The analysis revealed that the reported UAP traveled at speeds far beyond human technological capability and consistent with those required for interstellar travel.

The study, conducted by Kevin Knuth, Robert Powell and Peter Reali, examines evidence from multiple incidents, including the final 32 frames from the Nimitz video during which the descending UAP traveled at an estimated 46,000 mph, 60 times the speed of sound, a rate far beyond that which we can approach with current technology. At one point, the UAP is caught on camera accelerating from 175 meters per second squared to an astonishing 4407m/s2.

The paper quantifies the observed accelerations as recounted by multiple witnesses observing directly and via radar and infrared video, and leaned toward conservative estimates. The acceleration estimates range from 175m/s2 to 4407m/s2 (17.9g to 450g), or Mach 60, as estimated from the radar observations of Senior Chief Operations Specialist Kevin Day on the USS Princeton during the 2004 Nimitz encounters.

During the encounter, the USS Nimitz was off the coast of Southern California, conducting maneuvers with the USS Princeton. It signaled that there were “as many as 20 anomalous aerial vehicles, which could not be identified.” Senior Chief Operations Specialist Kevin Day later found more UAPs on the radar flying at over 80,000 feet above Santa Catalina and the San Clemente Islands.

Notably, current human-manufactured equipment can handle much less acceleration. The analysis cites the Lockheed Martin F-35 Lightning II, which can maintain structural integrity up to 13.5g. Meanwhile, the unmanned Crotale NG VT1 missile can withstand 50g and can maintain maneuverability up to 35g. These accelerations are about 50 percent of the lowest accelerations estimated for these UAPs. Equally notable is the fact that the UAP did not produce sonic booms or the heat that would be produced from the hundreds of GigaWatts of power normally expected to be required to achieve the acceleration.

One cited example in the analysis is the Tic-Tac shaped UAP descending from 28,000 ft to sea level in 0.78s, which would require at least 4.3×1011J of energy (assuming a mass of 1000kg).  The analysis points out that this is the equivalent of some 100 tons of TNT, or the yield of 200 Tomahawk cruise missiles, released in 34 of a second. In our understanding, this would have a dramatic and catastrophic impact on the surrounding area.

“Such a craft accelerating at a constant 1000g for half of the trip and decelerating at the same rate for the remaining half would reach Proxima Centauri within 5 days’ ship time due to the fact that it would have been traveling at relativistic speeds for most of the trip. However, for those of us on Earth, or anyone on Proxima Centuri b, the trip would take over four years. As a comparison, a craft accelerating at 100g would reach 10% of the speed of light in 8.5hrs, 30% of the speed of light in just more than a day, and Proxima Centuri in a month and a half.”

The analysis abstract powerfully captures the implications: “The observed flight characteristics of these craft are consistent with the flight characteristics required for interstellar travel, i.e., if these observed accelerations were sustainable in space, then these craft could easily reach relativistic speeds within a matter of minutes to hours and cover interstellar distances in a matter of days to weeks, proper time.”

In an unrelated interview with CNN, Luis Elizando described the UAP as “Things that don’t have any obvious flight services, any obvious forms of propulsion, and maneuvering in ways that include extreme maneuverability beyond, I would submit, the healthy G-forces of a human or anything biological.”

The study does not determine whether or not the Navy was threatened during this incident, nor does it speculate on whether the craft are alien in origin.  It does, however, offer that the craft may be anomalous, or remotely operated, and that the craft appear far outside current human technological capability. The analysis states that “it is extremely difficult to imagine that anyone on Earth with such technology would not put it to use.”

The study, published in MaxEnt, the 39th International Workshop on Bayesian Inference and Maximum Entropy Methods in Science and Engineering, states that the “craft appear to violate the laws of physics in that they do not have flight or control surfaces.” Further, the physicists believe the aircraft violated Newton’s Third Law, operating without sonic booms.