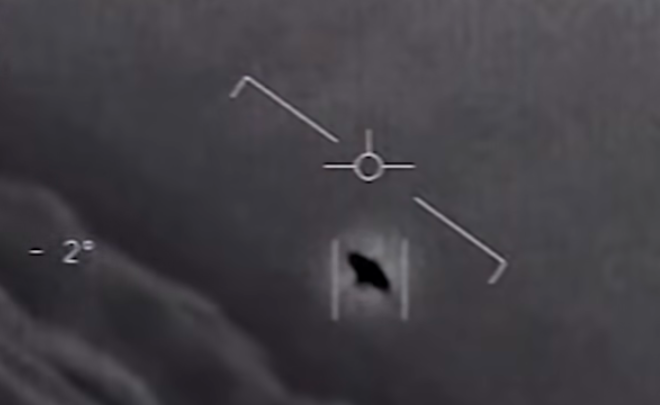 There have been multiple credible, contemporary sightings of unidentified aerial phenomena by US Navy pilots. Video and photographs of the encounters with the crafts exist and defy conventional understanding.

Two classified UAPTF intelligence reports, one from 2018 and one from 2020, reportedly have been widely distributed within the U.S. Intelligence Community. The reports reportedly include striking photographic evidence of UAP.

The 2018 UAPTF report includes a photo of an UAP emerging from the ocean on the east coast of the U.S. The pilot reportedly captured the image on his cellphone from the cockpit.

The 2020 UAPTF revised report explored the possibility that the recently sighted UAP are able to move through the air and also underwater, traveling undetected underwater and emerging into the air with enormous speed. The report contained a photo of a triangular aircraft that reportedly emerged from the ocean on the East Coast in 2019 directly in front of a F/A-18 Hornet fighter pilot.

The 2020 UAPTF report included significant discussion of these “Unidentified Submersible Phenomena,” or “transmedium” craft operating freely both underwater and in the air. This follows a pattern seen in 2017, when former Navy Commander David Fravor addressed the well-known recorded encounter with a “Tic Tac”-shaped craft over the Pacific in 2004.

According to Fravor’s account, he was flying in an F/A-18F Super Hornet when he saw the unidentifiable craft. The craft seemed to be under water and then emerged, moving swiftly beyond Fravor’s sight as he approached. The object was smooth, white and oblong, with no visible wings or engines, and was approximately the size of a commercial airplane.

In other sightings, Navy pilots have described shapes including a cube inside a transparent sphere, a large disc, and small round craft.

Officials who spoke to The DeBrief, a publication focusing on science, technology and defense, regarding this subject reportedly suggested the UAPTF has considered whether the UAP are originating from the ocean.

In addition to the Tic-Tac-shaped craft, sightings have included craft shaped like an equilateral triangle reportedly with rounded edges and large spheres that appeared to be lights in the corners.

The aircraft behaved in ways that are not normal to earthly aircraft, moving at speeds and performing complex moves that are impossible in the context of known human technology.

Based on various sightings and calculations, the Tic-Tac-shaped UAP are estimated to be approximately 40 feet in length.

The Tic-Tac shaped UAP sighted in the Nimitz encounter reportedly descended from 28,000 ft to sea level in 0.78s,  which would require at least 4.3×1011J of energy (assuming a mass of 1000kg). This is the equivalent of some 100 tons of TNT, or the yield of 200 Tomahawk cruise missiles, released in 34 of a second. It would have created an enormous number of sonic booms and would have had a dramatic impact on the surrounding area.

Fravor is among multiple pilots who had encounters with the craft. He said: “This is not like we saw it and it was gone or I saw lights in the sky and it’s gone – we watched this thing on a crystal clear day with four trained observers.”

Video of that encounter was shot by Navy pilot Chad Underwood on the infrared camera on the left wing of his F/A-18 Super Hornet.

The Navy pilots encountered the UAP after Navy radar operator Kevin Day identified unusual objects flying in groups of five to 10 over the Pacific Ocean near San Clemente Island off San Diego. The crafts flew at a speed that was too slow for human aircraft (other than a balloon), approximately 120 knots, or 138 miles per hour, at 28,000 feet.

Day provided a complete and highly credible interview on the subject that is available via The Nimitz Encounters on YouTube.

Former Senate Democratic leader Harry Reid of Nevada has shown a long-term interest in the subject of UFOs or UAPs and has advocated for government research of the subject.  He recently tweeted that the Navy videos “only scratches the surface of research and materials available.”

Robert Bigelow, a friend of Harry Reid, runs Bigelow Aerospace, an aerospace research company, and has worked with NASA to produce spacecraft. In cooperation with the Department of Defense, Bigelow’s company produced reports on sightings of aircraft that moved with extraordinarily high speeds and signs of propulsion, and that hovered motionlessly with no apparent signs of lift.

James E. Oberg, a former NASA engineer and spaceflight engineer who has written 10 books on the subject, has been a vocal skeptic of recent sightings. Mick West is another vocal skeptic who has explained how the videos could appear to show unusual phenomena without there being any. See UAP News link.

In 2009, the Department of Defense prepared a briefing of the UAPTF program that stated “what was considered science fiction is now science fact,” and that the United States was incapable of defending itself against some of the technologies discovered.

Discussion about the videos and extraterrestrials have persisted throughout the upper echelons of American politics in recent years. During the earlier half of the 2016 presidential campaign Hillary Clinton said if elected president she would release files on potential UFO sightings. Her campaign chairman, John Podesta, has shown interest in UAPs.  Former President Trump has been asked by media about UAP sightings and was equivocal and dismissive.

An Aug. 29 news release by the U.S. Department of Defense confirmed the meeting between Esper and Kono in Guam to address “views on their shared vision for a free and open Indo-Pacific region.”

Astrophysicist and former consultant for the UFO program, Eric W. Davis, told the New York Times in July that he gave a classified briefing to the Defense Department agency as early as March regarding “off-world vehicles not made on this earth.”

A senior military official told CNN that some of the recent UAP sightings by pilots are highly classified programs under testing. After the sightings captured public attention, senior Navy intelligence officials briefed Congress, as well as aviators on the safety hazards.